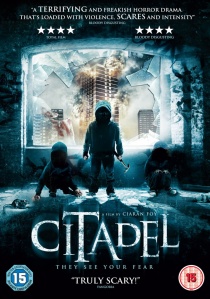 The dilapidated suburbia of Edenstown casts a shadow over Tommy Cowley's (Aneurin Barnard) life. Trapped there by his agoraphobia since his wife was fatally attacked by twisted feral children, he now finds himself terrorised by the same mysterious hooded gang, who seem intent on taking his baby daughter.

Torn between the help of an understanding nurse and a vigilante priest (James Cosmo), he discovers that to be free of his fears, he must finally face the demons of his past and enter the one place that he fears the most...the abandoned tower block known as the Citadel.

Related Articles
Hold the Sunset: Series 1, Whisky Galore!, London Heist, SS-GB, The Justice Game: Series 1 and 2, Dark Signal, Braveheart: 20th Anniversary, Justin and the Knights of Valour, Braveheart: Collectors Edition, The Lives Of The Saints, The Hole in the Ground, His Dark Materials: Series 1
Kiri, Fearless, Dancing On The Edge, The Body Farm: Series 1, I Am Slave, Luther: Series 5
SS-GB, The Adventurer: The Curse Of The Midas Box, Cilla, Trap For Cinderella, The Facility, Elfie Hopkins, Hunky Dory, We'll Take Manhattan, Dead In A Week (Or Your Money Back), Radioactive
Blood
Comments
UHD Releases News Pick