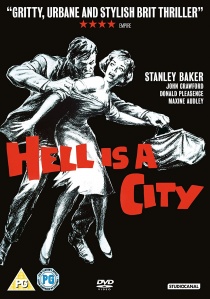 News
News Article Go back to homepage
Based on the novel by Maurice Proctor, directed by Val Guest for Hammer Studios and starring Stanley Baker, Maxine Audley and a young Billie Whitelaw, Hell Is A City has been digitally re-mastered and will be out on DVD on 8th October 2012 from StudioCanal.
Joseph Tomelty, Billie Whitelaw, Maxine Audley, Donald Pleasence, John Crawford, Stanley Baker
Val Guest
Michael Carreras
StudioCanal
1 hour 33 minutes
08/10/2012
Thank you for supporting DVD365.net when you order using the link(s) below. As an Amazon Associate we earn from qualifying purchases
Buy DVD
Information

Based on the novel by Maurice Proctor, directed by Val Guest for Hammer Studios and starring Stanley Baker, Maxine Audley and a young Billie Whitelaw, Hell Is A City has been digitally re-mastered and will be out on DVD on 8th October 2012 from StudioCanal.

Harry Martineau (Stanley Baker: The Cruel Sea, Zulu, Accident) is a tough, dedicated police inspector on the trail of Don Starling (John Crawford: The Enforcer), who escaped from prison after serving 5 years of his 14-year prison sentence for a jewelry robbery and killed a warden in the process. Inspector Martineau was the arresting officer and knew the troubled Starling from his youth. Hesuspects Starling to be going to Manchester to recover the stolen jewels he hid away before being convicted.

Indeed, Starling returns undetected to Manchester and goes to see Laurie Lovett (Charles Morgan: Sergeant Cork), who was in on the jewelry heist. Grateful Starling never turned him in Lovett finds him a place to hide at night. He reveals his plans to get a phony passport and flee the country, but not until he gets all the money he needs to execute his escape. He plans the next day to rob the bookmaker Gus Hawkins (Donald Pleasence: Halloween) of his gambling take with the help of Lovett's gang.

The robbery doesn't go as planned and the gang is forced to disappear in different directions. Starling contacts Gus' wife Chloe (Billie Whitelaw: The Omen, Frenzy) with whom he previously had an affair. She hides him in the attic located in the bedroom but when Gus takes a peek thinking he heard a noise, he is hit on the head and hospitalized with a concussion as the police take note that Starling has been spotted for the first time in Manchester and thereby connect him to the robbery.

As inspector Martineau tracks him down and the gang of men he knows must be working with him, suspense builds at every turn. The gang falls one by one, until only the killer is left. 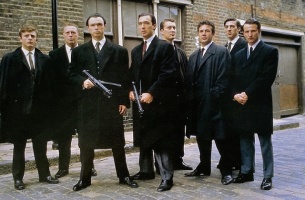 HotBD
Two of Britain's most notorious brothers The Krays were taken on by another famous pair of siblings The Kemps in Peter Medak's big screen gangster biopic set for a Limited Edition Blu-ray release from Second Sight Films on 12th July 2021. END_OF_DOCUMENT_TOKEN_TO_BE_REPLACED
Comments
Hot Pick

HotUHD
Say the 'B' word three times and have a wonderful Day-O as Tim Burton's Beetlejuice arrives for the first time on 4K UHD 31st August 2020 from Warner Home Video. END_OF_DOCUMENT_TOKEN_TO_BE_REPLACED
Top PicksView