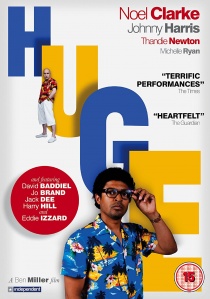 Released on DVD from Independent Distribution on 3rd October 2011, the directorial debut by actor and comedian Ben Miller (The Armstrong And Miller Show; Johnny English), Huge is a "heartfelt" (The Guardian) comedy-drama that exposes the dark side of stand-up comedy and the lengths people are willing to go to in order to achieve their dreams.

Feuding comedy duo Warren and Clark (Harris and Clarke, respectively) have dreams of making it big. As they gig around the comedy clubs of deepest, darkest London struggling for recognition they discover an unforgiving, cutthroat comedy circuit that is incredibly difficult to break into. Facing overwhelming odds and rampant personal jealousy, Warren and Clark are beginning to wonder if they have what it takes to be the next big thing. Whatever the answer, this is definitely one double act you won't want to miss.