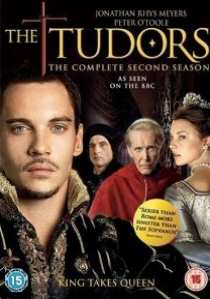 The sexy and sumptuous account of one of the most tumultuous reigns in English history returns for a second sensational series when The Tudors - Season 2 is released to buy on Blu-ray and DVD from 13th October 2008, courtesy of Sony Pictures Home Entertainment. This lavish, Emmy Award-winning drama from Michael Hirst, creator of the Oscar-winning Elizabeth and Elizabeth: The Golden Age,is currently airing on primetime BBC2 and is set to be released on DVD immediately after the gripping season finale.

Sometimes an obsession can change the world. Determined to marry Anne Boleyn whatever the cost, Henry casts off Queen Katherine (Maria Doyle Kennedy, Mystics, TV's Queer As Folk) and, in a move that will transform his country forever, appoints himself head of the Church of England, provoking the anger of Rome. Unfortunately for the triumphant new Queen we discover all too soon why she is later called 'Anne of a Thousand Days' as the political and emotional turmoil of life at court claims yet another victim. Meanwhile, the beautiful Jane Seymour (Anita Briem, Journey to the Centre of the Earth) is waiting in the wings...

Plotting and passion abound in this royal romp through history, also available to buy in a Blu-ray and DVD box set with the acclaimed first season. Moreover, Season 2 boasts a host of exclusive behind-the-scenes featurettes that bring you closer than ever to the world of The Tudors.