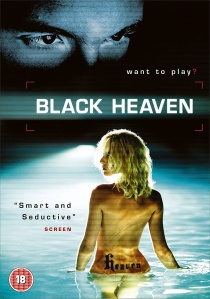 Tron meets Blue Velvet in Black Heaven, released on DVD by Arrow Films on 5th September 2011, a stylish and sexy French techno-thriller from the creative partnership behind Lemming and Harry, He's Here To Help. Gilles Marchand (Who Killed Bambi?) directs from a script co-written with his regular collaborator and fellow director Dominik Moll (Lemming; Harry, He's Here To Help) to produce a movie that has been described as "inventive" (Variety), "intelligent... [and] riveting" (Hollywood Reporter).

Young lovers Gaspard (Leprince-Ringuet) and Marion (Etienne) are enjoying summer in the south of France when they stumble upon a lost cell phone. Intrigued by some of the text messages on the phone, they decide to secretly track down its owner. What begins as a seemingly harmless game takes a dark turn when they find a man dead in an exhaust fume filled car, the victim of what appears to be a bizarre suicide pact. Next to him is an unconscious girl, Audrey (Bourgoin).

Several days later, Gaspard coincidentally runs into Audrey at the apartment of a local drug dealer and immediately becomes obsessed by this beautiful and enigmatic woman. His fixation leads him into a dangerously addictive online role-playing video game, Black Hole, in which he sets about seeking out Audrey's 'avatar', Sam, a fetishistic nightclub singer who lures victims in the virtual world and seduces them into committing suicide with her. But Gaspard soon discovers that for Audrey/Sam the line between fantasy and reality is rapidly disappearing.

HotDVDBDDIGITAL
With stunning revelations, glamorous journeys, and the arrival of the Jazz Age, Downton Abbey: A New Era, released on DVD and Blu-ray 15th August 2022 from Warner Home Video, will be the Crawleys' biggest adventure yet as they grapple with their future and new intrigue about ... END_OF_DOCUMENT_TOKEN_TO_BE_REPLACED
Top PicksView