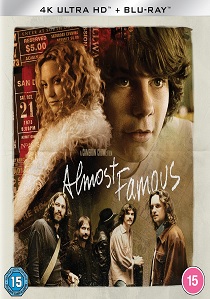 Rolling Stone magazine unwittingly hires 15-year-old William (Patrick Fugit), an aspiring journalist, after they read an article he wrote for Creem magazine. Almost Famous is the hilarious and touching story of this intelligent young man's journey into the world of rock and roll as he tours with Stillwater, an up-and-coming band struggling with their rise to fame.

Almost Famous was nominated for 4 Academy Awards® and was winner of Best Original Screenplay (Cameron Crowe, 2000).

Set in 1973, Almost Famous chronicles the funny and often poignant coming-of-age of 15-year-old music fanatic William (Patrick Fugit). Having managed to land an assignment from Rolling Stone magazine to interview the up-and-coming band Stillwater, fronted by lead guitarist Russell Hammond (Billy Crudup) and with the help of gorgeous 'band aid' Penny Lane (Kate Hudson), William finds himself drawn into the band's inner circle, despite the objections of his over-protective mother (Frances McDormand).

As he becomes less an observer and more a participant in the band's dynamics, William learns a life-changing lesson about the importance of family - the ones we inherit and the ones we create.

UHD
Based on the global blockbuster videogame franchise from Sega, Sonic The Hedgehog, released on DVD, Blu-ray and 4K UHD from 8th June 2020 from Paramount Home Entertainment, tells the story of the ... END_OF_DOCUMENT_TOKEN_TO_BE_REPLACED
Top PicksView