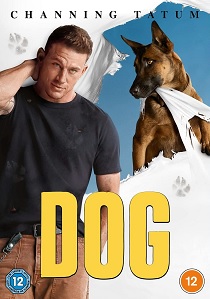 NewsComedyChanning Tatum
News Article Go back to homepage
Dog, released on DVD and Blu-ray 16th May 2022 from Entertainment in Video, is a buddy comedy that follows the misadventures of two former Army Rangers paired against their will on the road trip of a lifetime.
Channing Tatum, Jane Adams, Kevin Nash, Q'orianka Kilcher, Ethan Suplee, Emmy Raver-Lampman, Nicole LaLiberte
Reid Carolin, Channing Tatum
Gregory Jacobs, Peter Kiernan, Brett Rodriguez
Entertainment in Video
1 hour 30 minutes
16/05/2022
#Dog
Thank you for supporting DVD365.net when you order using the link(s) below. As an Amazon Associate we earn from qualifying purchases
Buy DVD
Buy BD
Information

Dog is a buddy comedy that follows the misadventures of two former Army Rangers paired against their will on the road trip of a lifetime.

Army Ranger Briggs (Channing Tatum) and Lulu (a Belgian Malinois dog) buckle into a 1984 Ford Bronco and race down the Pacific Coast in hopes of making it to a fellow soldier's funeral on time. Along the way, they'll drive each other completely crazy, break a small handful of laws, narrowly evade death, and learn to let down their guards in order to have a fighting chance of finding happiness.

Dog is released on DVD and Blu-ray 16th May 2022 from Entertainment in Video.

HotDVDBD
From the producers of Nobody and John Wick comes a bare-knuckle, coal-dark holiday action-comedy that says you should always bet on red as Violent Night sledges in on DVD and Blu-ray 6th March 2023 from Warner Home Video. END_OF_DOCUMENT_TOKEN_TO_BE_REPLACED
Top PicksView