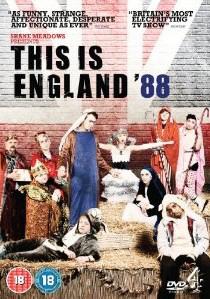 This Is England '88, written by Shane Meadows and Jack Thorne (The Scouting Book for Boys, Skins), pulls together story threads from the highest rated original drama series ever launched by C4, This Is England '86, to produce a superb combination of uproarious comedy and desolate, gritty drama. Described by Meadows as "A truly British Christmas; an anti-climax. A bit nice, with some horrible shit mixed in" '88 may not be looking so festive for some....

Haunted by the devastating events that took place 18 months ago, Lol (Vicky McClure) and Woody (Joe Gilgun) both find themselves struggling to cope with the emotional fallout. Lol soon finds her reserves of strength ebbing away as she struggles to deal with new responsibilities and past haunts. With her soul mate Woody, heartbroken from her betrayal and in self-imposed exile from the gang, Lol becomes increasingly isolated and alone. And they're not the only ones lacking in festive spirit, as Shaun (Thomas Turgoose) learns the hard way, just how much love hurts.

Set over three hour-long films, This Is England '88 leaves the way clear for a new series of This Is England '90, which is currently in development. Packed full of never-seen-before deleted scenes, exclusive behind-the-scenes footage and commentaries from key cast and crew, This Is England '88} is available to own on DVD & Blu-ray from 12th March 2012.