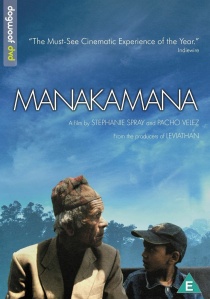 Lauded by critics as film of the year, Manakamana is a stunningly original and breathtaking cinematic experience. The film follows pilgrims as they make an ancient journey by cable car to worship high above a jungle in Nepal and makes its home entertainment debut courtesy of Dogwoof.

The Hindu Manakamana Temple is almost a mile above sea level, instead of a lengthy journey on foot, worshippers can now take a 10-minute cable car journey up in to the mountains to pray at this sacred place. Using a 16mm camera co-directors Stephanie Spray and Pacho Velez join a varied mix of subjects on their pilgrimage. Manakamana will be available on DVD and VOD on 9th February 2015.

The scenery is mesmerising, as are the characters - a diverse mix of commuters - from a group of old women discussing how much things have changed, a group of young men taking selfies, an elderly man and his grandson, a mother and daughter eating ice-creams, a married couple and their chicken and a herd of goats. Every shot follows a different set of passengers as we learn about them and their lives.