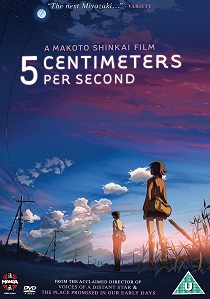 Hailed by many fans and critics as Japanese animation's successor to Hayao Miyazaki (Ponyo; Howl's Moving Castle; Spirited Away), director Makoto Shinkai (The Place Promised In Our Early Days) presents his "most mature and complicated work yet" (Anime News Network), 5 Centimetres Per Second, coming to DVD on 14th March 2011 from Manga Entertainment and featuring a brand new and superior audio dub produced by Bang Zoom! Entertainment.

Taking its title from the speed at which cherry blossoms fall, 5 Centimetres Per Second comprises three interconnected short stories, each centred on the hopes and dreams of a boy named Takaki Tono, beginning in the 1990s and end in the present day.

The story begins when a new girl, Akari Shinohara, transfers to Takaki's elementary school, the two very quickly grow close to each other due to their similar interests and personalities and are soon inseparable. That is until Akari's parents have to move because of their jobs and, inevitably, have to take their daughter with them. The two friends remain in touch by letter but, despite their mutual affection, they begin to drift apart. When Takaki is informed that he and his family will also be moving even further away, he decides to take a trip to visit Akari and reveal his true feelings to her.

Through breathtaking animation and simple, heartfelt storytelling, Makoto Shinkai paints a vivid tableau of young love, desire, loss and hope with an unforgettably beautiful work that will thrill and delight fans of Satoshi Kon (Paprika; Millennium Actress), Mamoru Hosada (Summer Wars; The Girl Who Leapt Through Time) and, of course, Hayao Miyazaki.

DVD
Catherine finally takes the Russian throne for her own - but if she thought coup-ing her husband was difficult, it's nothing compared to the realities of liberating a country that doesn't want to be in The Great: Season Two, ... END_OF_DOCUMENT_TOKEN_TO_BE_REPLACED
Top PicksView