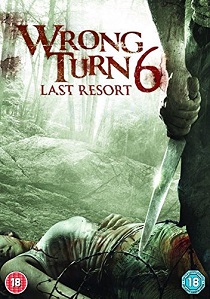 Starring Roxanne Pallett (Emmerdale, Lake Placid 3), Wrong Turn 6 - Last Resort is the captivating horror flick reviving the notorious exploits of the Hillicker family. A mysterious inheritance brings Danny (Anthony Ilott) and his friends to Hobb Springs, a forgotten resort deep in the West Virginia hills. Hobb Springs is under the care of Jackson (Chris Jarvis: The Bill, Mamma Mia!) and Sally (Sadie Katz: House of Bad, Scorned), an awkward couple who introduce Danny to a family he's never known - a clan by the name of Hillicker.

For generations, the Hillickers have observed traditions rooted in cannibalism and other taboo rituals, practices that have kept the family strong if not necessarily pure. Tempted by the forbidden, Danny is forced to choose between friends and blood.

Wrong Turn 6 - Last Resort guarantees to leave audiences cowering as villains quench murderous thirst - no one is safe in this encounter.

DVD
In Brian And Charles, released on DVD and Blu-ray 10th October 2022 from Mediumrare, an inventor lives alone in a remote village in the countryside, inventing useless things out of found objects in his garage. That is until ... END_OF_DOCUMENT_TOKEN_TO_BE_REPLACED
Top PicksView