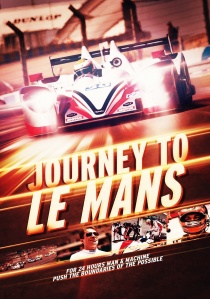 Le Mans the biggest motorsport event in the world, is truly a spectacle like no other. The twenty-four hour race is considered the most physically and mentally demanding race on earth. Man and machine push themselves to the limits of endurance, many never make it past the finish line, and some never make it home. Yet it still impassions men from all over the world to come and take it on. Jota Sport, a small British privateer team know all too well the cruelty of the race, having unsuccessfully taken on the prestigious event on eight occasions - it remains their nemesis. Upon the start line of Le Mans 24 2014, Jota sits, battle scarred as underdogs. 24 hours of life changing, punishing racing ensues...

Narrated by Sir Patrick Stewart, Journey To Le Mans brings to the screen the spectacle that is Le Mans, through the eyes and emotions of the men at the very heart of it. Proving with enough hard work, dedication and passion, you really can achieve anything. It is a depiction of the blood, sweat and tears we see, as we travel with the team. Our journey playing out over the season to - and during - Le Mans 2014.

Journey To Le Mans is released on DVD and Blu-ray on 24th November 2014, courtesy of Kaleidoscope Home Entertainment.

DVD
Doctor Strange teams up with a mysterious teenage girl from his dreams who can travel across multiverses in Doctor Strange in the Multiverse of Madness, released on DVD, Blu-ray and 4K UHD 18th July 2022 from ... END_OF_DOCUMENT_TOKEN_TO_BE_REPLACED
Top PicksView