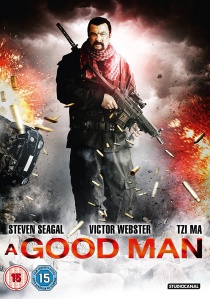 Featuring cut-throat samurai sword action and Tzi Ma from Rush Hour, A Good Man, released on DVD on 25th August 2014, courtesy of StudioCanal, is Seagal at his all-time neck-breaking best.

When notorious special ops soldier Alexander (Steven Seagal) loses a Chinese target in a botched mission, he decides to quit the business and try to lead a normal life, going off the grid and finding work as a handyman.

When one of his clients gets caught up with an infamous Russian gangster, Alexander vows to protect them at all costs. As he realises that he has entered into the middle of a war between rival Russian and Chinese gangs, he sees his opportunity to finally bring his once lost target to justice.