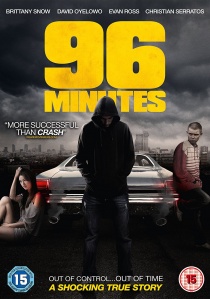 Inspired by true events, 96 Minutes is the story of four teenagers and the events that unfold over one terrifying night. Told in real time, the film cuts between a disastrous carjacking at the end of the day and the seemingly unconnected events leading up to it. Four kids. One night. One shocking act of violence that slams them headlong into each other.