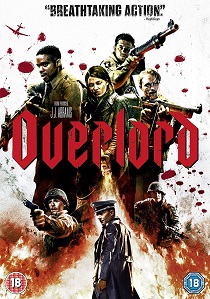 NewsActionHorrorAdventure
News Article Go back to homepage
Released on 4K Ultra HD, Blu-ray and DVD 11th March 2019 from Paramount Home Entertainment, nothing can prepare you for the mind-blowing mayhem that is Overlord, the insanely twisted thrill ride about a team of American paratroopers who come face-to-face with Nazi super-soldiers unlike the world has ever seen.
Jovan Adepo, Wyatt Russell, Pilou Asbaek, John Magaro, Bokeem Woodbine, Mathilde Ollivier
Julius Avery
J.J. Abrams
Paramount Home Entertainment
1 hour 45 minutes
11/03/2019
#Overlord
Thank you for supporting DVD365.net when you order using the link(s) below. As an Amazon Associate we earn from qualifying purchases
Buy DVD
Buy BD
Buy UHD
Information

Embraced by critics, Overlord is Certified Fresh on Rotten Tomatoes and was hailed as "wonderfully tense and truly exhilarating" (Jonathan Barkan, Dread Central). The wildly entertaining genre mash-up boasts a stellar ensemble cast, non-stop action and plenty of wild twists you have to see to believe.

With only hours until D-Day, a team of American paratroopers drop into Nazi-occupied France to carry out a mission that's crucial to the invasion's success. Tasked with destroying a radio transmitter atop a fortified church, the desperate soldiers join forces with a young French villager to penetrate the walls and take down the tower. But, in a mysterious Nazi lab beneath the church, the outnumbered G.I.s come face-to-face with enemies unlike any the world has ever seen.