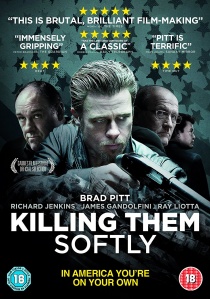 Two petty criminals - who think they have a no-risk plan - are recruited to rob a high stakes, Mob-protected poker game causing the local criminal economy to collapse. Brad Pitt plays Jackie Cogan, the enforcer hired to track down the culprits and restore order, in his own unique way.

Killing Them Softly also features Richard Jenkins, (The Visitor), James Gandolfini (The Sopranos), Ray Liotta (Goodfellas), Scoot McNairy (Monsters), Ben Mendelsohn (Animal Kingdom) and Vincent Curatola (The Sopranos). Killing Them Softly is written for the screen and directed by Andrew Dominik (The Assassination Of Jesse James By The Coward Robert Ford) and is based on George V. Higgins novel, Cogan's Trade.

Killing Them Softly will be released by Entertainment in Video on DVD and Blu-Ray on 25th February 2013.