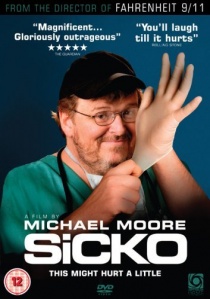 Following the trailblazing path of his previous hit films, the Oscar-winning Bowling For Columbine and all-time box-office documentary champ Fahrenheit 9/11, Michael Moore is back with a new film, SiCKO, released from Optimum Home Entertainment on 7th January 2008 - a film that many are calling his best film ever.

SiCKO is a straight-from-the-heart portrait of the insane, often cruel, and always profit-hungry U.S. health care system, told from the vantage point of everyday people faced with extraordinary and heartbreaking challenges in their quest for basic medical care. Michael Moore asks his fellow Americans "What is wrong with us?"

Moore shows that U.S. health care ranks last among developed nations despite costing more per person than any other health system in the world. Moore seeks answers in Canada, Great Britain, and France, where all citizens receive free medical care. Finally, Moore gathers a group of 9/11 heroes rescue workers now suffering from debilitating illnesses, unable to receive help at home, and takes them to a most unexpected place where they receive the tender care unavailable in the richest nation on earth.

DVD
An expert cutter must outwit a dangerous group of mobsters in order to survive a fateful night in The Outfit, released 1st August 2022 on DVD, Blu-ray and 4K UHD from Dazzler Media. END_OF_DOCUMENT_TOKEN_TO_BE_REPLACED
Top PicksView