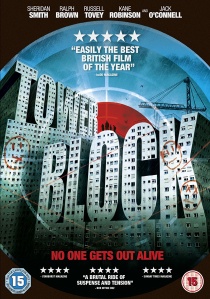 Lionsgate Home Entertainment are delighted to announce the release of Tower Block on DVD & Blu-Ray on 4th February 2013.

An edgy thriller which closed Fright Fest 2012, Tower Block is written by James Moran (Severance) and directed by duo James Nunn and Ronnie Thompson, the writer and producer of Screwed.

When Jimmy is brutally murdered by two hooded figures, the residents of the Serenity House tower block are witnesses to the killing but, fearing retribution, are too scared to give detectives any information and the police investigation is going nowhere.

One year later, someone has decided to take justice into their own hands. Picked off one by one, the tenants of the tower block are under threat from a mystery sniper who has set deadly traps throughout the building keeping them prisoners in their own homes.

Unsure of why they have been targeted, the group put their differences aside and undertake daring attempts to escape the building. But with every exit leading to another death, will they ever escape?