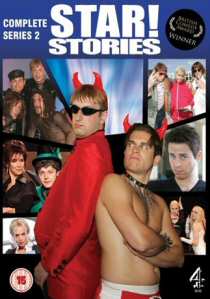 NewsTV SeriesComedy
News Article Go back to homepage
From the producers of Peep Show, the British Comedy Award-winning spoof show Star Stories is back to throw open the doors of the closely-guarded world of celebrity and poke fun at the industry's biggest players, with the release of Series 2, available to own on DVD on 17th November 2008 from 4DVD.
Steve Edge, Alex Woodhall, Harry Peacock, Laura Patch, Kevin Bishop, Tom Basden
Ben Palmer, Elliot Hegarty
Michael Livingstone, Andrew O'Connor, Lee Hupfield, Philip Clarke
4DVD
Unknown
17/11/2008
Thank you for supporting DVD365.net when you order using the link(s) below. As an Amazon Associate we earn from qualifying purchases
Buy DVD
Information

From the producers of Peep Show, the British Comedy Award-winning spoof show Star Stories is back to throw open the doors of the closely-guarded world of celebrity and poke fun at the industry's biggest players, with the release of Series 2, available to own on DVD from 17th November 2008, with the Series 1-2 Box Set also released on the same day by 4DVD.

In an age where celebrity worship is the new religion, this is a comedy series with its tongue firmly in its cheek. Parodying the lives and loves of several big-time Hollywood actors and international pop stars, there's a chance for all and sundry to see what may have been at all those talked-about auditions, premieres, back-stage parties and family feuds.

Each episode provides a fascinating insight into the weird and wonderful world of the A-listers. Featuring a host of up-and-coming British talent including Kevin Bishop (Peep Show, The Kevin Bishop Show), Steve Edge (Peep Show)and Rhys Thomas (The Fast Show), Star Stories is a glossy, fast-paced, antidote to the notion of celebrity.

WITNESS how Gary Barlow is taken under the wing of Nigel Martin-Smith ('Sign here Gary and I'll make us both rich...in blood if you don't mind - it's just something the lawyers insist upon these days'), be AMAZED at the creative partnership between Robbie Williams and Gary ('You're singing's shite Robbie!'). WONDER as Oasis make Robbie an offer at Glastonbury ('Do you wanna come on stage with us and dance like a fat idiot?') and THRILL and throw your knickers to Take That's incredible, yet still incredibly humble comeback.

See how Tom Cruise is introduced to Scientology after being hit over the head with a shovel by John Travolta ('Ouch...wait a minute. Scientology. Of course it all makes perfect sense now') and the romantic moment when Tom first met Nicole Kidman ('Would you mind sitting down in order to make me seem taller?'). MARVEL as Simon Cowell hires Louis Walsh for the first time ('You won't just be a yes man will you Louis?' 'Yes' 'Good') and DAZZLE as Britney Spears shaves her head, goes a bit bonkers, starts hanging out with Paris Hilton and then goes out without any knickers on.

The award-winning show is a collaboration between writers Bert Tyler-Moore and George Jeffries and writer and producer Lee Hupfield. Headed up by a regular troupe of young and exciting talent, each episode focuses on a different celebrity and their just-as-famous friends and partners. Putting their existence under the microscope in a sacrilegious biopic of their lives to date, Star Stories is sure to raise laughs and ruffle feathers in equal measure.