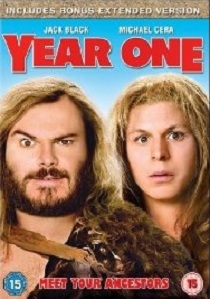 On 2nd November 2009, Sony Pictures Home Entertainment invites you to witness the evolution of comedy as the hilarious Year One arrives on Blu-ray and DVD. Created by comedy legend Harold Ramis (Caddyshack, Groundhog Day), Year One stars Jack Black (Nacho Libre, Tropic Thunder) and Michael Cera (Juno, Superbad) as an unlikely duo of primitive men who, after being exiled from their tribe, set out on a laugh-out-loud journey through the ancient world.

Along the way, they encounter a host of famous historical figures played by a tribe of film comedy's best, including Hank Azaria (Night at the Museum 2), David Cross (TV's "Arrested Development"), Christopher Mintz-Plasse (Superbad), Oliver Platt (2012, Frost/Nixon), Paul Rudd (I Love You, Man) and Horatio Sanz (TV's "Saturday Night Live"). Trust us, history has never been this crude, rude or historically funny!

Now, Year One journeys from the ancient world onto Blu-ray and DVD, which include both the original theatrical version of the film and an all-new Uncut Version with even more irreverently funny footage not shown in cinemas, plus cool bonus features like deleted scenes, extended and alternate scenes, an alternate ending, Line-o-Rama, gag reel, audio commentary with director Harold Ramis, Jack Black and Micheal Cera, the making-of featurettes "Year One: The Journey Begins," "Sodom's Got'em" and "Leeroy Jenkins: The Gates of Sodom," and more! Exclusive to the Blu-ray Disc of Year One are the highly evolved special features "Year One Cutting Room," which lets viewers create their own video using clips and music from the film, and share it on BD-Live.

Year One also includes the newest BD-Live feature from Sony Pictures: movieIQ, which lets viewers access real-time trivia information about Year One's cast, crew, music and production, all while watching the movie (powered by Gracenote). The Blu-ray version also features cinechat, which allows movie watchers to send on-screen instant messages to friends around the world while watching the movie and, finally, a Digital Copy for playback on PC, PSP®, Mac or iPod.

Whether you're a hunter or gatherer of great movie comedies, be sure and drag Year One back to your cave for historical and hysterical laughs!

History was made...by these guys? Zed (Jack Black) and Oh (Michael Cera) are cavemen who stumble out of the mountains into an epic journey of biblical proportions. One's a bumbling hunter, the other's a gentle gatherer; together, they become unlikely participants in history's most pivotal moments. Directed and co-written by comedy legend Harold Ramis (Groundhog Day, Caddyshack, Analyze This), Year One is rude, crude, wildly absurd, deliciously tasteless and laugh-out-loud funny!

Bonus Material Included on All Versions

BD
In The Little Things, released on DVD and Blu-ray 10th May 2021 from Warner Home Video, Kern County Deputy Sheriff Joe "Deke" Deacon is sent to Los Angeles for what should have been a quick evidence ... END_OF_DOCUMENT_TOKEN_TO_BE_REPLACED
Top PicksView