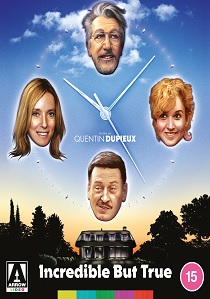 Quirky, deadpan humour, an absurdist eye for French social etiquette and a keen sense of the folly of existence are among the hallmarks of the oddball comedies of director Quentin Dupieux (Rubber, Deerskin, Smoking Causes Coughing), and Incredible But True is no different. The film has been described as "a fun little trinket that unmistakably comes from Dupieux's far-out perspective" (Jessica Kiang, Variety) and "a film with something of Charlie Kaufman or Spike Jonze" (Peter Bradshaw, The Guardian).

Alain (Alain Chabat, Valerian and the City of a Thousand Planets) and Marie (Léa Drucker, War of the Worlds) are a middle-aged bourgeois couple who move to their new house in a quiet suburb. A key feature of their new abode that the estate agent points out to them is a mysterious tunnel in the basement. Little do they realise that it will turn their lives upside down...

Incredible But True, released on Blu-ray 26th December 2022 from Arrow Video, is an inventive and nimble tale that perfectly showcases the singular and eccentric vision that has made Dupieux the most exciting director working in France today.

HotDVDBDDIGITAL
With stunning revelations, glamorous journeys, and the arrival of the Jazz Age, Downton Abbey: A New Era, released on DVD and Blu-ray 15th August 2022 from Warner Home Video, will be the Crawleys' biggest adventure yet as they grapple with their future and new intrigue about ... END_OF_DOCUMENT_TOKEN_TO_BE_REPLACED
Top PicksView