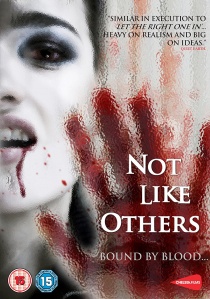 Fans of movies such as Martin, The Hunger and Let The Right One In looking for their next bloody fix of intelligent and 'realist' vampire fare need look no further than Not Like Others, the accomplished debut feature from writer-director Peter Pontikis and starring Jenny Lampa (Dead On Arrival) and Ruth Vega Fernandez (the Johan Falk film series).

Vera (Jenny Lampa) and Vanja (Ruth Vega Fernandez) are a pair of vampire sisters, bloodsucking outcasts struggling to live a secret life in semi-isolation in the bleak suburbs of Stockholm. While hanging out together in one of the city's dive bar nightclubs, Vera makes the fatal mistake of feeding on and killing the leader of a skinhead biker gang in one of the club's toilet stalls. When the body is discovered by one of the victim's buddies, the sisters are forced to run into the night, pursued by a gang of ruthless thugs intent on revenge.

During the intimidating ordeal of being hunted, Vanja begins to open up to Vera and reveals her already-rooted but, until now, unspoken plans to give up being an outsider, to try and adjust to the real world and to begin a relationship with a human with whom she believes she has fallen in love. Terrified by the idea of having to live a life of solitude as a vampire without her sister, Vera decides she will do anything to keep Vanja by her side. Meanwhile, the skinhead bikers are closing in...

Director Pontikis' highly original and almost existentialist take on vampire lore uniquely and refreshingly presents the protagonists as sympathetic characters, resulting in a surprisingly heartbreaking story of two sisters whose common dependency upon human blood and each other become the very things that threaten to tear them apart.

Not Like Others will be released on DVD by Chelsea Films on 25th October 2010. The disc features Stereo 2.0 or Dolby Digital 5.1, English subtitles, Scene selection and Trailer.

From the 1870s through to modern day, Radioactive is a journey through Marie Curie's (Rosamund Pike) enduring legacies - her passionate partnerships, scientific breakthroughs, and the consequences that follow.
Movie quote