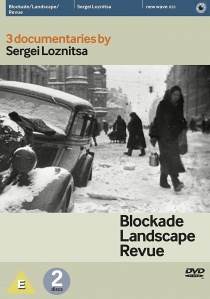 News
News Article Go back to homepage
Blockade, Revue & Landscape, released on DVD courtesy of New Wave Films on 23rd September 2013, is a collection of three documentaries by Belorusian director Sergei Loznitsa.
New Wave Films
Unknown
23/09/2013
#BlockadeRevueLandscape
Thank you for supporting DVD365.net when you order using the link(s) below. As an Amazon Associate we earn from qualifying purchases
Buy DVD
Information

Blockade, Revue and Landscape are feature-length films made between 2003 and 2008. Each has its own topic and style, and yet as a group they give a good idea of Sergei Loznitsa's way of looking at the world. The release of this special DVD, courtesy of New Wave Films on 23rd September 2013, set will allow UK viewers to discover three much revered but mostly unseen documentary films by Sergei Loznitsa.

The longest siege during World War II was that of Leningrad, which lasted for 900 days, from September 1941 to January 1944, when Hitler attempted to starve the Soviet city of three million people into submission. Estimates of the number of residents who died from starvation, disease or cold range from 641,000 to 800,000. Comprised solely of rarely seen footage found in Soviet film archives, Blockade vividly re-creates those momentous events, featuring a meticulously reconstructed, state-of-the-art soundtrack added to the original black-and-white silent footage.

Winter. People are waiting for a bus in the Russian town of Okulovka. They talk. Listening to their conversations, the viewer is immerged in the world they live in. United by the movement of the camera, the whole place and the people blend together. Reminiscent of the work of Michael Snow and of Chantal Akerman in D'Est (1992), Landscape is an absorbing documentary showing both the people waiting for a bus and the atmosphere of this wintery wait, the tensions and worries featured in discussions recorded separately from the image, resulting in a poignant and often funny documentary.

In Revue, Sergei Loznitsa researched footage from the 1950s and 1960s, selecting excerpts from newsreels, propaganda films, TV shows and feature films that present a portrait - in images - of Soviet life during the same period. The film's fascinating flow of disparate scenes representing a certain idea - and ideal- of Soviet life, appear, from today's perspective, as alternately poignant, funny, and tragic. The cumulative impact reveals a life of hardship, deprivation and seemingly absurd social rituals, but one always inspired by the vision, or illusion, of a communist dream.