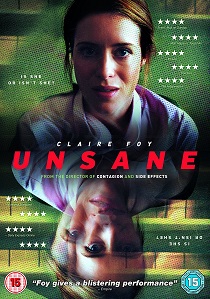 A young woman is involuntarily committed to a mental institution where she confronts her biggest fear in the unique and thrilling film Unsane, arriving on DVD 23rd July 2018 from Twentieth Century Fox Home Entertainment.

Academy Award®-winning director Steven Soderbergh plunges audiences into the suspense and drama of a resilient woman's fight to reclaim her freedom even as she risks her own sanity. Still scarred from the trauma of being terrorised by a stalker, Sawyer Valentini (Foy) receives treatments at the Highland Creek Behavioral Center. Shortly after she unwittingly commits herself to confinement at the mental institution, she catches sight of a facility staffer who, she is convinced, is actually her stalker. But is he real or just a product of her delusion?

UHD
Based on the bestselling comic book, Vin Diesel stars as Ray Garrison, a soldier recently killed in action and brought back to life as the superhero Bloodshot, available 8th June 2020 from Sony ... END_OF_DOCUMENT_TOKEN_TO_BE_REPLACED
Top PicksView