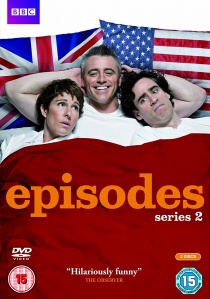 Matt LeBlanc, who gained a Golden Globe for his role in Series 1, plays a deliciously outrageous version of himself in this laugh-out-loud comedy from creators David Crane (Friends) and Jeffrey Klarik (Mad About You). Back for a second series, Episodes offers a peek behind the curtain at the insanity of Hollywood. You'll never watch TV the same way again.

Sean (Stephen Mangan) and Beverly (Tamsin Grieg) are a happily married English couple, who are also the successful creators of a hit British TV show. Their life seems complete. That is until a hugely powerful and charismatic US network president persuades them to move to LA to remake their show for American television. He's full of praise and promises "not to change a thing".

However, things begin to unravel as soon as Sean and Beverly arrive in LA. They discover that the network president has never even seen their show. To make matters worse, he insists that they replace their brilliant lead actor (Richard Griffiths), an erudite Royal Shakespeare veteran with... Matt LeBlanc! Sean and Beverly are appalled. But the decision is out of their hands. Matt comes on board, and soon Sean and Beverly find themselves in a complicated triangle which threatens to destroy not just their TV show but also their marriage.

Lauded by USA Today as "easily the best new sitcom of the season", the critically acclaimed Episodes returns for a much-anticipated second series.

The second series picks up four months after the end of the first. Sean and Beverly's marriage has been blown apart by Beverly's fling with Matt, and Matt's friendship with Sean appears to be beyond salvage. But as their sitcom "Pucks!" is about to premiere, all three are forced to find a way to continue working together. As the series progresses, we are plunged deeper into the twisted world of making television. It's a portrait gallery of megalomaniac network executives, surgically-enhanced actresses and naked stalkers who appear unexpectedly in your kitchen. Through it all, Sean and Beverly struggle to rediscover the love they had when they started their American adventure, while Matt struggles to reclaim the stardom that was once his.