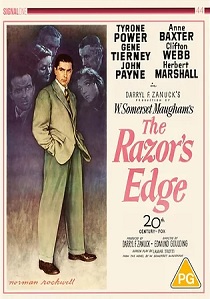 Despite being offered an impressive job when he returns from World War I, Larry Darrell (Power) instead opts for the Paris bohemian lifestyle, followed by a soul-searching trip to the Far East. After his beautiful fiancée (Gene Tierney) loses patience with the spiritual seeker and marries a wealthy man, Larry finds himself drawn to Sophie (Anne Baxter in an OSCAR®-Winning performance), an old friend.

Newly widowed, Sophie has descended into alcoholism, a state from which Larry hopes to save her in this thought-provoking film nominated for four Academy Awards®, including Best Picture.

The Razor's Edge is released on dual-format DVD and Blu-ray 6th June 2022 from Signal One Entertainment.

Related Articles
Swamp Water, The Ten Commandments, All About Eve: The Criterion Collection, Walk on the Wild Side
Comments
BD Releases News Pick

BD
From the acclaimed director of fan-favourites such as Baby Driver, Shaun of the Dead and The World's End comes the tribute to 1960s London in Last Night In Soho, available to own on DVD, Blu-ray and 4K UHD 31st January 2022 ... END_OF_DOCUMENT_TOKEN_TO_BE_REPLACED
Top PicksView