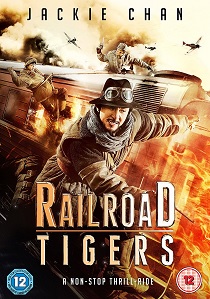 It's 1941, and a factory worker and his ragtag group of freedom fighters, the Railroad Tigers, including a tailor, a noodle shop owner and some maintenance men, hijack enemy trains and loot them to get food for the poor. They decide to up the ante, and embark on a high risk mission to sabotage a bridge, in order to prevent a heavily armed military train from reaching its destination. Outgunned and outnumbered, they must fight an entire army using only their wits.

Already a massive hit in China, the legendary Jackie Chan's latest shows, like last year's Police Story: Lockdown, that Chan is showing no signs of slowing down, and can still high kick with the best of them.

Here Chan, starring in an action comedy that ranks alongside Rush Hour and Shanghai Knights, puts men half his age to shame as he leads a band of outlaws on a suicide mission. Police Story: Lockdown director Ding Sheng, making his third film with Chan, knows how to get the best out of the veteran star, who performs death-defying stunts aboard a moving train, fends of a tank and dodges a flying motorbike (not to mention hundreds of bullets) - not bad for a man in his 60s!

Railroad Tigers also sees Chan passing the baton onto the next generation of onscreen action heroes, in the form of his son Jaycee, who stars alongside him and proves the apple doesn't fall far from the tree, and showcasing the talents of rising martial arts star Zitao Huang.

Railroad Tigers is released on DVD and Blu-ray 8th May 2017 from Kaleidoscope Home Entertainment.