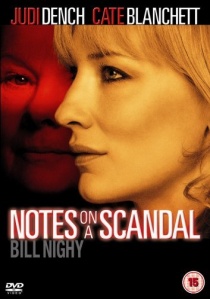 Based on the best seller by Zoe Heller, this psychological thriller is a tale of two women caught up in a drama of need and betrayal. When Barbara Covett, a domineering and lonely teacher, begins a passionate obsession with her new younger and more attractive colleague it sets in motion a scandal that will rock both their lives in a way they never imagined. Cate Blanchett plays Sheba Hart, a naive and misguided woman, who upon starting as the new art teacher at St George's School in leafy North London, attracts the attention of the calculating and manipulative colleague, Barbara Covett (Judi Dench).

Save for her cat, Portia, Barbara lives alone, without friends or confidantes and so enjoys this rapport she has formed with her new-found 'kindred spirit'. Their budding relationship, however, takes an ominous turn when Barbara threatens to expose Sheba's affair with one of her young students (Andrew Simpson) to both her husband (Bill Nighy) and the world.

With powerhouse performances by both its leads, this mesmerising story, noted in equal parts dark humour and realism in the diary of Barbara Covett, is a fascinating look into the darker side of loneliness and obsession. This riveting thriller received four Academy Award nominations; Best Actress for Judi Dench, Best Supporting Actress for Cate Blanchett, Best Adapted Screenplay for Patrick Marber and Best Score for Philip Glass. The film also received three BAFTA nominations (for Best British Film, Best Actress for Judi Dench and Best Adapted Screenplay for Patrick Marber). Dench, Blanchett and Marber also received Golden Globe nominations. Based on Zoe Heller's award-winning novel of the same name, Notes On A Scandal is directed by Richard Eyre (Iris, Stage Beauty) from an adaptation penned by Patrick Marber (Closer) and has a stellar support cast including Bill Nighy (Love Actually) who plays Cate's cuckolded husband.

Related Articles
The Monuments Men, The Life Aquatic with Steve Zissou: The Criterion Collection, Thor: Ragnarok, Manifesto, Knight of Cups, Truth, Carol, Cinderella, How To Train Your Dragon 2, The Monuments Men, Blue Jasmine, Hanna, Indiana Jones And The Kingdom Of The Crystal Skull, I'm Not There, Babel, The Gift, The Lord of the Rings: The Fellowship of the Ring (Special Extended Edition), The Lord of the Rings: The Fellowship of the Ring, The Talented Mr. Ripley, Ocean's 8, The House With a Clock in its Walls, How to Train Your Dragon: The Hidden World, The Hobbit Trilogy, Indiana Jones: 4-Movie Collection 4K, Cinderella, Nightmare Alley
Truly, Madly, Deeply, Love on a Branch Line
Murder On The Orient Express, Victoria & Abdul, The Hollow Crown: The Wars of The Roses, The Second Best Exotic Marigold Hotel, Roald Dahl's Esio Trot, Philomena, Riddick, Skyfall, The Best Exotic Marigold Hotel, Nine, Cranford: The Specials, Quantum Of Solace, Casino Royale: Deluxe Edition, Casino Royale, Casino Royale : Deluxe Edition, Die Another Day, Tomorrow Never Dies, All Is True, A Handful of Dust, Red Joan, Blithe Spirit, Six Minutes to Midnight, Belfast
No Offence: Series 2, No Offence, Big School, The Thick of It: Series 4, No Offence: Series 3, How To Talk To Girls At Parties, Dracula, The Larkins, The Larkins: Series 2
Hooten and the Lady, Identity, Small Axe
The Children Act
For your consideration 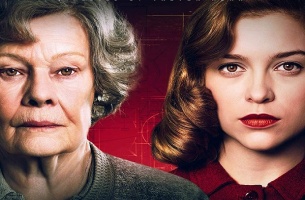 HotDVDBD
Inspired by an extraordinary true story, Red Joan, released on DVD and Blu-ray 19th August 2019 from Lionsgate Home Entertainment, is the taut and emotional discovery of one woman's sacrifice in the face of incredible circumstances. END_OF_DOCUMENT_TOKEN_TO_BE_REPLACED
Comments
Hot Pick

HotDVDBDDIGITAL
With stunning revelations, glamorous journeys, and the arrival of the Jazz Age, Downton Abbey: A New Era, released on DVD and Blu-ray 15th August 2022 from Warner Home Video, will be the Crawleys' biggest adventure yet as they grapple with their future and new intrigue about ... END_OF_DOCUMENT_TOKEN_TO_BE_REPLACED
Top PicksView