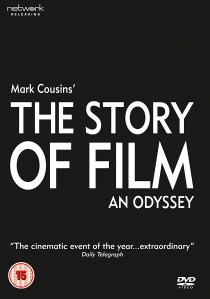 Network Releasing is proud to announce the DVD debut of filmmaker and writer Mark Cousins' epic ode to the history of the moving image. The Story Of Film: An Odyssey is available to buy on 23rd April 2012, in a limited edition steel case.

This set includes exclusive interviews with 40 of the greatest filmmakers, including Stanley Donen who directed Singin' in the Rain; Robert Towne who wrote Chinatown; Jane Campion who made The Piano; Iran's master director Abbas Kiarostami; the most famous actor in the world, Amitabh Bachchan; Lars Von Trier; Claire Denis; Buck Henry who wrote The Graduate; and Kyoko Kagawa who was in masterpieces by Akira Kurosawa and arguably the best filmever made Tokyo Story - by Yasujiro Ozu.

Produced by Hopscotch Films, this exhilarating documentary sees critically acclaimed director, film critic and curator Mark Cousins embark on an epic journey, in which he chronicles the birth and evolution of the great and popular art form - cinema. Lovingly researched and filled with passion, this 15-hour journey filmed over six years on five continents is independent filmmaking at its very best. It covers 11 decades of movie history illustrated with over a thousand film clips.

This voyage takes us to many famous moments in film - the birth of Hollywood and the great movie genres, the evolution of movie stardom, the shock of the French 'New Wave', the revolution of digital cinema, etc. But it goes much further, to open a window on, amongst many things, Shanghai films of the 30s, the great Indian melodramas of the 50s and the triumph of African filmmakers of the 70s. The journey also touches and delves into social issues at various periods in the 20th Century including the role of women in cinema and the driving force behind the industry.

This is Mark Cousins' love letter to the art of cinema - the glowing magic lantern that is held up and shines light upon the countless reels of films and the most influential art form of the 20th Century.