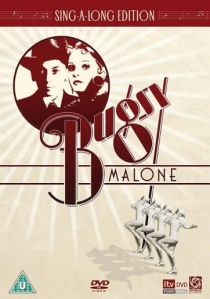 New York, 1929. A war rages between two rival gangsters, Fat Sam and Dandy Dan. Dan is in possession of a new and deadly weapon, the dreaded 'splurge gun'. From the director of The Commitments and Evita, Bugsy Malone : The 30th Anniversary Sing-A-Long Edition is released on DVD on 26th March 2007 from Optimum Classics.

As the custard pies fly, Bugsy Malone (Happy Days' Scott Baio), an all-round nice guy, falls for Blousey Brown, a singer at Fat Sam's speakeasy. His designs on her are disrupted by the seductive songstress Tallulah (double Academy Award ® winner Jodie Foster) who wants Bugsy for herself.

Written and directed by Sir Alan Parker, this gangster musical satire is one of the best loved movies of the 1970s. It features a great cast, catchy song and dance routines and hilarious slapstick comedy.

BD
A 13-year-old girl named Meilin turns into a giant red panda whenever she gets too excited in Disney and Pixar's 25th feature film Turning Red, released on DVD, Blu-ray and 4K UHD 2nd May 2022 from Walt Disney Home ... END_OF_DOCUMENT_TOKEN_TO_BE_REPLACED
Top PicksView