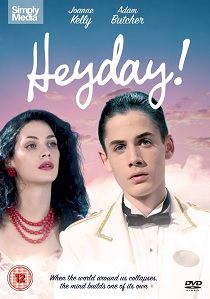 The final days of WWII are turbulent ones for 16-year old Terry Fleming (Adam Butcher - Rookie Blue) - a sharp young man who fantasises about what it might be like to work at the airport hotel in Gander, Newfoundland, where pilots and movie stars rub shoulders with the locals.

When his mother becomes gravely ill and the family house is quarantined, it is Terry's brilliant imagination that carries him on a poignant journey of love and longing. Terry conjures up the hotel world to keep his fears at bay, dreaming of encounters with show business legends complete with a spy mystery and a romance with his vivacious neighbour Laurie Dwyer (Joanne Kelly - Warehouse 13). But with a war outside and death upstairs, Terry must choose between boyhood fantasies or confronting life's hard truths.

Heyday!, released on DVD by Simply Media on 8th February 2016, is a moving and inventive coming of age fantasy drama from Canada, directed by Gordon Pinsent (Babar) and also stars Peter MacNeill (A History of Violence).

BD
Finding praise from critics around the world, Boyhood, following the life of Mason, from early childhood to his arrival at college, is released on Blu-ray and 4K UHD 27th March 2023 from Arrow Films. END_OF_DOCUMENT_TOKEN_TO_BE_REPLACED
Top PicksView