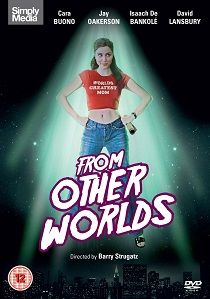 Depressed Brooklyn housewife Joanne Schwartzbaum (Cara Buono - Mad Men) has been sleepwalking her way through life for as far back as she can remember, but when an alien force reveals itself to her in her own kitchen, she is instantly snapped out of her complacent existence. Attending a UFO support group, Joanne befriends African immigrant Abraham Kanga (Isaach De Bankole - 24) and together they determine to solve the mystery of their otherworldly experiences. Along the way, Joanne finds romance, saves the planet and finds new meaning in her life.

This absorbing tale arrives on UK DVD for the very first time on 8th February 2016, courtesy of Simply Media.

BD
Bursting with indelible characters, quotable dialogue and jaw-dropping special effects, Tremors is back and bigger than ever in this 4K-restored and fully loaded collectors' edition, available on 4K ... END_OF_DOCUMENT_TOKEN_TO_BE_REPLACED
Hot PicksView

Cormoran Strike and Robin Ellacott investigate the blackmail of a Government Minister and the story of a strangled child in Strike: Lethal White arriving on DVD 23rd November 2020 from Warner Home Video.

Starring #BenedictCumberbatch, out our trending #NewsArticle on #DoctorStrange available on #4KUHD