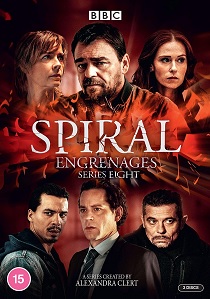 The end of series seven saw the demise of the Laure-Gilou team, but not of their relationship together. Their unorthodox investigation methods have landed Gilou in prison, awaiting trial. Taking advantage of the situation, Crime Squad Superintendent Brémont asks him to get acquainted with a fellow prisoner who's a high-profile criminal. In exchange for his reinstatement into the police, Gilou is taken out of prison to infiltrate a gang of heisters. Meanwhile, Laure and Ali are struggling to work as a team in a group that's been sidelined.

The murder of a young Moroccan migrant spurs them back into action, although they have to deal with the trauma of Gilou's incarceration. Josephine decides to defend the murder suspect - an unaccompanied Moroccan minor called Souleymane - and develops a close bond with him. Things get complicated when the cases Laure and Gilou are working on turn out to be connected. They join forces again to see their investigations through, exposing themselves to all kinds of danger.

UHD
Sam Mendes, the Oscar®-winning director of Skyfall, Spectre and American Beauty, brings his singular vision to his World War I epic, 1917 to DVD, Blu-ray and 4K Blu-ray 18th May 2020 from Entertainment One. END_OF_DOCUMENT_TOKEN_TO_BE_REPLACED
Top PicksView