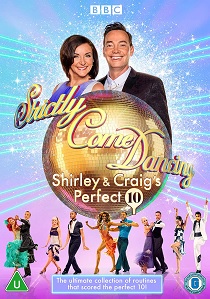 The feature length special sees Shirley and Craig take a trip down memory lane as the pair recall some of the greatest routine's in the show's 16 year history. Including those that were worthy of a perfect 10 score, like Kelvin Fletcher and Oti Mabuse's Samba, Emma Barton and Anton Du Beke's Viennese Waltz, Stacey Dooley and Kevin Clifton Pasa Doble, Ore Oduba and Joanne Clifton's Jive, Debbie McGee and Giovanni Pernice's Tango, and more.

Strictly fans know that Head Judge Shirley likes to reward couples that have shown flare, skill, heart and effort and she's not afraid to pull out her 10 paddle. Whereas Craig is a little more reticent to reach for his 10 paddle! Across 17 series and over a thousand routines, Craig has only ever deployed his 10 paddle 71 times. Can the duo agree to work together to select their favourite 10s and select a joint favourite Strictly routine of all time?

Shirley Ballas said: "It's never too early for a ten from Shirley! Watch me take Craig on a tour of some fantastic routines that have earned a coveted ten, but that Craig only deemed worthy of a nine. I'm going to highlight Craig's fussiness, point out his mistakes and get him to change his mind!"

The special also looks at the other side of the score paddle. Shirley and Craig look back at some of the show's dances that delighted audiences, despite not getting top scores from the judges, such as John Sergeant and Kirstina Rihanoff's memorable Pasa Doble and Ann Widdecombe and Anton du Beke's Titanic-themed Rumba.

Craig Revel Horwood added: "It wouldn't be a Strictly DVD if we didn't include a few dance disasters, darling! You will also see some fab-u-lous dances that I did award a maximum score to."

UHD
When an alien spacecraft of enormous power is spotted approaching Earth, Admiral James T. Kirk resumes command of the USS Enterprise in order to intercept it, in the ... END_OF_DOCUMENT_TOKEN_TO_BE_REPLACED
Top PicksView