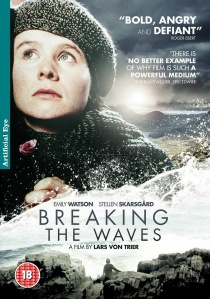 A moving and uplifting but brutal assessment of love, faith, social pressure and human dignity. Breaking the Waves, released on DVD and Blu-ray on 10th November 2014 courtesy of Artificial Eye, earned an Academy Award® nomination for Emily Watson in her breakthrough role and demonstrated to the world the power of Lars von Trier's filmmaking ability.

In 1970's Scotland, young Bess meets and falls in love with oil rig worker Jan. Despite opposition they marry, and when Jan returns to the rigs Bess counts the days until his return. After Jan is paralysed in an accident, he urges Bess to take a lover and relate their sexual acts to him.

The soundtrack includes music by David Bowie and T-Rex.

HotDVDBD
With a 4K restoration supervised and approved by director Richard Kelly, one of the most talked-about films of the last twenty years, Donnie Darko, is being re-released in dual-format DVD and Blu-ray from Arrow Video on 12th December 2016. END_OF_DOCUMENT_TOKEN_TO_BE_REPLACED
Hot PicksView