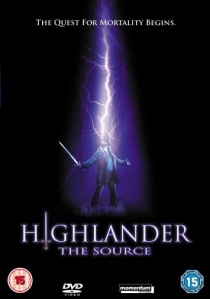 From maverick science-fantasy movie director and digital visual effects pioneer Brett Leonard (Feed; Virtuosity; The Lawnmower Man) comes a new beginning for the ever-popular Highlander phenomenon - Highlander: The Source, released on DVD by Momentum Pictures on 7th January 2008. Packed from start to finish with the kind of trademark eye-popping, cutting edge visuals for which Leonard is best known, this is unquestionably Highlander for the "Hi-Def Generation".

As the world falls into chaos and destruction, Duncan MacLeod, the Highlander, aimlessly roams a crumbling city in the remote reaches of Eastern Europe, haunted by memories of happier times and a lost love, his wife Anna. Unexpectedly sought out by a band of Immortals, including his old friend Methos and the mortal Watcher Joe Dawson, McLeod finds himself leading them in search of The Source. But unbeknown to them, their prize is protected by an ancient warrior, The Guardian, a being destined to hunt down and destroy any who seek its secrets.

HotDVDBDTV
DCI Tom Brannick returns, as the murder of a crooked accountant unravels a trail of greed that threatens to expose the true identity of the legendary assassin, codenamed, Goliath in Bloodlands: Series 2 released on DVD and Blu-ray 14th November 2022 from Dazzler Media. END_OF_DOCUMENT_TOKEN_TO_BE_REPLACED
Top PicksView