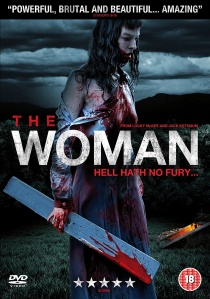 Directed by Lucky McKee (The Woods; Masters Of Horror; May) and co-written by award winning horror novelist Jack Ketchum (Red; The Girl Next Door; The Lost), The Woman, released on DVD and Blu-Ray by Revolver Entertainment on 17th October 2011, stars Angela Bettis (Toolbox Murders; Carrie; May), Sean Bridgers (Deadwood) and Pollyanna McIntosh (Burke And Hare; Exam; Land Of The Lost) in a savage and harrowing film examining the darkness of human nature.

When lawyer and proud family man Chris Cleek (Bridgers) stumbles across a wild, feral woman (McIntosh) bathing in a woodland stream near his isolated country home, he immediately makes a decision that will dramatically change both their lives.

Chris captures the woman and chains her up in the fruit cellar below his house, intending to tame and civilise her. To assist him, he enlists the help of his long-suffering wife Belle (Bettis), their two teenage children, Peggy and Brian and even their youngest daughter, Darlin'. But when the task at hand proves to be more difficult than first imagined, the Cleek family's fascination and well-intentioned compassion quickly turns to abhorrence and sadistic cruelty. Now, the animal in everyone is about to be revealed, along with one or two of Chris' other little secrets.

Described by the Hollywood Reporter as being "like an especially perverse Lars Von Trier outing" and by Variety as "an exercise in extreme horror", The Woman earlier this year proved itself to be one of the most controversial films ever to be screened at the Sundance Film Festival, thanks to its realistic and unflinching depiction of the psychological and physical brutality visited by what appears to be a normal American family upon a seemingly disadvantaged and helpless woman.

The Woman is laced with intense savagery and dark humour that builds to a simply unforgettable climax.