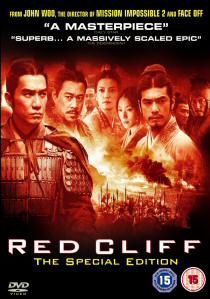 News
News Article Go back to homepage
Director John Woo returned to his native China to direct the epic 208 AD Battle Of Red Cliff, now coming to DVD and Blu-ray on 5th October 2009, courtesy of Entertainment In Video.
John Woo
Entertainment In Video
Unknown
05/10/2009
Thank you for supporting DVD365.net when you order using the link(s) below. As an Amazon Associate we earn from qualifying purchases
Buy DVD
Buy BD
Information

Director John Woo first came to fame with violent thrillers such as Hard Boiled and action films like Hard Target before hitting a new peak with John Travolta and Nicolas Cage in Face/Off and Tom Cruise and Thandie Newton in Mission: Impossible II. He then took a sabbatical from filmmaking for a while before returning to his native China to film this spectacular historical epic based on the 208 AD Battle Of Red Cliff which has similar status in Chinese folklore as the legends of King Arthur do here.

Woo originally made the film in two parts with each part being approximately two-and-a-half hours in length and it was this version that was released theatrically in China. However, the two parts were combined and edited to make a single shorter movie for international markets and it received huge critical acclaim when it was released theatrically in the UK in the summer by Entertainment Film Distributors.

This version is now coming to retail DVD, rental DVD and Blu-ray on 5th October 5 2009, courtesy of Entertainment In Video - who will also be releasing on the same date on retail DVD and Blu-ray Red Cliff: The Special Edition which comprises the two original full-length features on two discs. It is the era of the Han Dynasty and despite the rule of Emperor Han Xiandi, China is divided into many warring Provinces. However, power-hungry Prime Minster Cao Cao (Zhang Fengyi - Farewell My Concubine; The Emperor And The Assassin) has ambitions to mobilize China's huge army, quell all resistance in the Provinces and then install himself as Emperor of a unified China.

Enraged to hear that two neighbouring Provinces have joined forces and become allies to oppose his plans, Cao Cao sends an army of 800,000 soldiers and 2000 ships to the fragile kingdom of Wu and they set-up camp at Crow Forest on the other side of the Yangtze River to Red Cliff where the allies are stationed. With food running short and their army vastly outnumbered by Cao Cao's forces, the allies seem doomed but Cao Cao underestimates the strategic brilliance of Zhou Yu (Tony Leung - Lust, Caution; Infernal Affairs; Hero) and Zhuge Liang (Takeshi Kaneshiro - Chungking Express; Fallen Angels).

Huge battles on both land and water ensue including a stunning hilltop showdown until eventually the opposing forces face-up to each other for the final epic last-ditch bloodbath which is the battle of Red Cliff and which is destined to change the course of Chinese history.