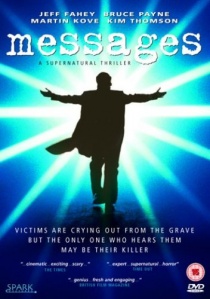 Following the sudden death of his wife and his subsequent mental breakdown that resulted in several alcoholic blackouts, forensic pathologist Dr. Richard Murray (Jeff Fahey) begins the slow and painful business of rebuilding his life and returning to work. But his emotional fragility is further shattered when he receives on his computer screen the first in a series of inexplicable messages pleading for his help.

Meanwhile, the murders of several beautiful young girls in the local area are being attributed to a serial killer whose modus operandi includes the removal of each victim's eyes. When the mutilated body of the latest victim arrives on his mortuary table, her identity leads Murray to suspect that the cryptic messages he is receiving are clues designed to lead him to the killer. Convinced the victims are crying out to him from beyond the grave, Murray becomes more and more entwined in the police investigation into the murders.

However, his unusual knowledge of the crimes and the victims soon make him a prime suspect in the case. In a shocking moment of awful realization, Murray is forced to question whether his mysterious messages are being delivered by supernatural forces or are simply the workings of a deranged mind. With the police closing in on him, he finds himself in a desperate race against time to find an answer.

Successfully managing to remain one step ahead of the audience throughout the proceedings, director Fairman combines moments of sheer terror with a Midsomer Murders-style whodunit story to produce a horror film packed with emotional impact and resulting in an unexpected denouement.

3D-BD
The surviving members of the resistance face the First Order once again, and the legendary conflict between the Jedi and the Sith reaches its peak as Star Wars: The Rise of Skywalker is released on ... END_OF_DOCUMENT_TOKEN_TO_BE_REPLACED
Top PicksView