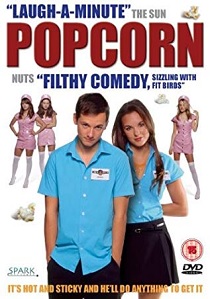 Starring former soap TV pin-ups Jack Ryder (EastEnders) and Jodi Albert (Hollyoaks), alongside rising British star Luke De Woolfson (Pirates Of The Caribbean 1 and 2; Stoned), Popcorn, released on DVD by Spark Pictures on 9th July 2007, is a sexy and salaciously funny teen comedy about getting the girl, losing the plot and the perils of taking relationship advice from the cinema screen.

Like many teenage boys, Danny (Jack Ryder) is more interested in the busty cartoon babes in his Manga comics and the fictional femmes of his favourite films than he is in real, living and breathing members of the opposite sex. That is until he sets eyes upon Suki (Jodi Albert), an usherette at his local multiplex who bears more than a passing resemblance to Danny's preferred Manga heroine, but with far more realistic attributes.

Too shy and insecure to approach this new girl of his dreams, Danny takes a job at the cinema only to discover that his first day at work is also Suki's last. Desperate to make an impression, and with only one day in which to do it, Danny embarks on a series of disastrous attempts to get the girl. But when Plans A and B both fail in spectacular style, Danny is forced to take further drastic action and resorts to seeking the help of the cinema's guru-like projectionist, Zack (Luke De Woolfson). Unfortunately, Zak has spent way too much time falling for the allure of the silver screen to the point where he can no longer tell the difference between real life and reel life. Nevertheless, Danny agrees to follow Zak's newly concocted Plan C - for "cinema" - and sets out to win the heart of the heroine in true Hollywood fashion.

BD
An expert cutter must outwit a dangerous group of mobsters in order to survive a fateful night in The Outfit, released 1st August 2022 on DVD, Blu-ray and 4K UHD from Dazzler Media. END_OF_DOCUMENT_TOKEN_TO_BE_REPLACED
Top PicksView