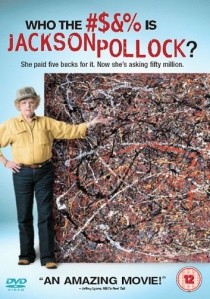 From former 60 Minutes producer Harry Moses comes the hit documentary Who the #$&% Is Jackson Pollock?. Released on retail DVD by Entertainment in Video on 4th June 2007, this rollicking adventure story documents 73-year-old Teri Horton's 15-year war with the art world, lifts the veil on how art is really bought and sold in America and introduces audiences to one of the funniest, most profane and thoroughly unforgettable real-life characters ever seen on screen.

When former long-haul truck driver Teri Horton bought a painting in a junk shop for five dollars, little did she realise that her purchase would pit her against the highest and mightiest people in the art world and perhaps change forever the way art is authenticated.

Employing the services of a forensic scientist, Teri learned that a fingerprint on the back of her canvas matched up with a fingerprint found on a can of paint in the studio of none other than Jackson Pollock, one of the twentieth century's most respected abstract expressionist artists.

More research showed that the paint on the floor of Pollock's studio also matched the paint on Teri's canvas. Discovering that a Jackson Pollock painting the size of hers was worth upwards of $50 million, Teri thought she had won the lottery. What she didn't expect was for the art establishment to proclaim that her painting was completely worthless.

In the 15 years that followed, the ageing woman with only an eighth grade education would embark on an arduous uphill battle against the elitists of the art world who continued to look down their noses at her. Unfortunately however they had reckoned without the determination of the redoubtable Ms Horton..