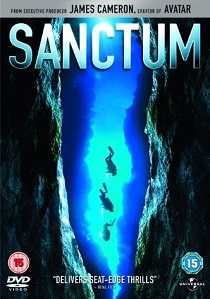 Based on a true story, all-action underwater survival thriller Sanctum is the latest film from three-time Academy Award® winning executive producer James Cameron (Avatar, Titanic), comes to DVD, Blu-ray and 3D Blu-ray Super Play (including 3D and 2D versions of the film and Digital Copy) on 13th June 2011 from Universal Pictures (UK). Dive in and submerge yourself in the adventure, as Sanctum takes you on a thrilling journey like nothing you will have ever seen before.

Master diver Frank McGuire (Richard Roxburgh; Stealth, Van Helsing) has explored the Esa'ala caves in the South Pacific for months and knows them inside out; that is until his one escape route is cut off. When a flash flood leaves Frank and his team trapped in a beautiful yet danger-filled abyss they must fight for survival as they desperately search for another way out of the underwater labyrinth.

Sanctum uses state of the art filming techniques to take viewers straight into the heart of the action on a breathless journey across plunging cliffs and into the farthest reaches of the subterranean world. Originally developed on Avatar, James Cameron's revolutionary stereoscopic 3D filming techniques make Sanctum a viewing experience like no other, and the perfect film to share with your dad this Father's Day.