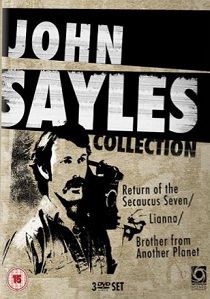 News
News Article Go back to homepage
23rd April 2007 sees Optimum Classics release the John Sayles Collection on DVD. This boxset brings together three early films from John Sayles, one of the foremost American Independent directors working today.
Optimum Classics
Unknown
23/04/2007
Thank you for supporting DVD365.net when you order using the link(s) below. As an Amazon Associate we earn from qualifying purchases
Buy DVD
Information

23rd April 2007 sees Optimum Classics release the John Sayles Collection on DVD. This boxset brings together three early films from John Sayles, one of the foremost American Independent directors working today. Never before available in the UK, these films are characterised by their nuanced observations, humanity and irrepressible sense of independence, forming the foundations of Sayles' illustrious career.

John Sayles' directorial debut, The Return of the Secaucus Seven is a landmark moment in American independent cinema. Shot on free locations with actors drawn from Sayles' Eastern Slope Playhouse, the film is an affectionately observed ensemble drama that deals with the annual reunion of several college friends. Formerly bound by the shared moral and political activism of 1960's campus life, the group have all chosen different paths since graduation but despite the shifts in time and the changing nature of their relationships remain linked by a shared experience and common humanity.

Directed, written and edited by Sayles, Lianna was one of the first American films to deal with a lesbian relationship in a non-exploitive manner. It also continued Sayles' crafting of strong female roles and interest in protagonists largely ignored by the mainstream.

Brother From Another Planet (1984)

Following a trying studio experience on Baby It's You, John Sayles triumphantly returned to independent productions with the African-American sci-fi allegory The Brother From Another Planet. Sayles regular Joe Morton (Lone Star) stars as an escaped mute black slave who fetches up in Harlem. Deftly performed and executed with Sayles' trademark gift for understatement, the film was a sizeable box-office success and was nominated for a Sundance Grand Jury Prize.

HotUHD
After moving to a new town, two brothers discover that the area is a haven for vampires as the classic The Lost Boys is released on 4K UHD 20th September 2022 from Warner Home Video. END_OF_DOCUMENT_TOKEN_TO_BE_REPLACED
Top PicksView