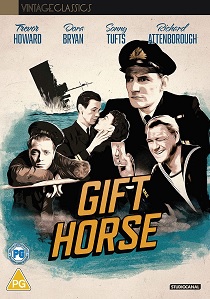 As part of the Vintage Classics range, a new restoration of the classic war film Gift Horse is released on DVD and Blu-ray 4th April 2022 from StudioCanal.

In 1940, the Royal Navy is frantically recruiting for WWII so pulls Lieutenant Commander Fraser out of retirement to captain the HMS Ballantrae, herself recently re-commissioned and lent by the Americans to a seriously under-resourced British Navy.

Despite an inauspicious start and multiple repairs, Fraser crafts the ship and its crew into an efficient fighting force, culminating in a daring mission to destroy a French dockyard which is crucial to the Nazis in maintaining their formidable battleships.

The climax of the film is a fictional account of the real-life St Nazaire Raid of 1942 AKA Operation Chariot - led by a ship very similar to the Gift Horse itself, and celebrated as The Greatest Raid of All.