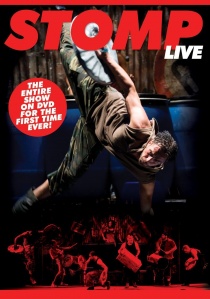 NewsComedyMusic
News Article Go back to homepage
Stomp Live, released by Kaleidoscope Home Entertainment on 6th April 2009, brings together performers from the West End, New York and Vegas for the very first time, to Stomp's home town and the theatre where many of the routines were originated: Brighton Dome.
Keith Middleton, Nathaniel Conroy, Andy Patrick, John Sawicki, Paul Bend, Jason Mills
Steve McNicholas
Kaleidoscope Home Entertainment
2 hours 20 minutes
06/04/2009
Thank you for supporting DVD365.net when you order using the link(s) below. As an Amazon Associate we earn from qualifying purchases
Buy DVD
Information

Stomp has gone from humble beginnings on the streets of Europe into an international sensation, touring all over the world (43 countries and counting!), with long running residencies spanning from London to Las Vegas and New York!!

Stomp Live, released by Kaleidoscope Home Entertainment on 6th April 2009, brings together performers from the West End, New York and Vegas for the very first time, to Stomp's home town and the theatre where many of the routines were originated: Brighton Dome.

During this mesmerising show, instantly recognisable household objects take on new life as percussive instruments in the hands of each of the Stompers: brooms, cigarette lighters, water bottles, basketballs and more are each explored for their sonic potential.

Dance meets rhythm in "Hands and Feet" and Stomp takes to the air in "Suspension", where the entire set becomes a musical instrument. The show climaxes with the "Bins" routine: a ten minute rhythm extravaganza in itself, using bins, oil drums and plastic drums with bin lid combat sequences...

To accompany the dazzling performance there's also a wealth of DVD extras. The extras include behind the scenes footage from the making of the DVD, information on the directors and a preview of Stomp 2009 and the Lost and Found Orchestra.

Combining physical comedy and athleticism, it's a highly charged performance from an idiosyncratic group who could only come from the world of Stomp. This is the first time the full show has ever been recorded in super-high resolution and released on DVD, so don't miss out on this superb visual and musical spectacle!

DVD
In The Black Phone, released on DVD and Blu-ray 3rd October 2022 from Warner Home Video, a teenage boy is abducted by a sadistic killer and discovers a phone in his basement cell that allows him to communicate with the killer ... END_OF_DOCUMENT_TOKEN_TO_BE_REPLACED
Top PicksView