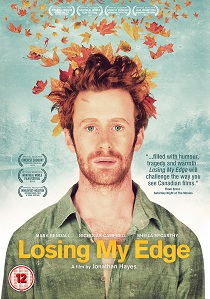 Set against the breathtaking and iconic backdrop of Algonquin Park, Loosing My Edge tells the story of Jake (Mark Rendall), a bored high school teacher who reunites with his estranged father, Leif (Nicholas Campbell), a once famed but washed up travel adventure writer.

In an effort to heal old wounds, Leif invites Jake to co-author what he claims will be his masterpiece - a book about Algonquin Park - and to return to the long-since visited family cottage with him to do so. However, when things take a terrible turn, Jake must decide if he will continue to work on the book or to abandon it and his desire to reconcile his relationship with Leif.

Returning to the cottage, Jake discovers that figuring it all out has gotten even more complicated - and learning to accept his father might mean something much different than he thought.

Loosing My Edge tells a powerful story about a father-son relationship and examines the nature and paths of healing, while also being a love letter to one of the most stunning landscapes in the world - one that is indelible in the Canadian consciousness. First time feature filmmaker Jonathan Hayes fills his lens with the majesty of the environment that forms the backdrop and soul of the film.

BD
In The Black Phone, released on DVD and Blu-ray 3rd October 2022 from Warner Home Video, a teenage boy is abducted by a sadistic killer and discovers a phone in his basement cell that allows him to communicate with the killer ... END_OF_DOCUMENT_TOKEN_TO_BE_REPLACED
Top PicksView