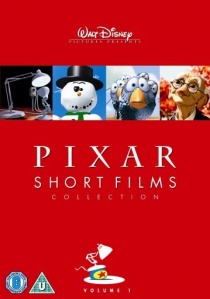 From the Award-winning studio that brought you hit films including Toy Story, Finding Nemo and The Incredibles, comes the inspirational Pixar Short Films Collection available DVD and Blu-Ray from Buena Vista Home Entertainment on 8th October 2007.

Animated Shorts have always been an essential part of Pixar's creative output, with the likes of Boundin' and Jack-Jack Attack huge hits in their own right. Now, for the first time ever comes the chance to own thirteen of the best Pixar Shorts on one DVD or Blu-ray disc, including Lifted, the unique and hilarious short from the forthcoming Disney/Pixar cinema release, Ratatouille.

The pioneering Shorts are among the most creative works to come from the Pixar stable, bringing together comedy, unique characters and outstanding animation to impressive effect. The formidable collection includes: Boundin'; One Man Band; Lifted; Jack-Jack Attack and Knick Knack and the Academy® Award-winning For the Birds and Geri's Game, providing a winning combination from some of the world's most talented and acclaimed film-makers.

Collectors and Pixar fans will be amazed by the exclusive never-before-seen bonus material that includes a look into the Shorts' first-class animation as well as interviews with the brilliant John Lasseter and other Pixar directors, revealing some of the best-kept secrets behind the favourite Disney/Pixar films and Shorts. There is also an Audio Commentary with director's insights into the Shorts as well as Animation and Commercial test for fans to enjoy.