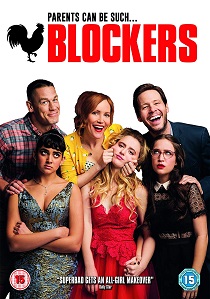 Hysterical and over-the-top parental trio John Cena (Trainwreck, Sisters), Leslie Mann (The Other Woman, This Is 40) and Ike Barinholtz (Neighbors, Suicide Squad) will do anything to foil their daughters' prom night sex pact in Blockers, the uproarious hit coming to Blu-ray and DVD 6th August 2018 from Universal Pictures (UK).

Hailed as the "perfect comedy for the current era" by Vanity Fair, Blockers is a gender-swapped spin on the classic teen sex comedy, filled with outrageous antics from the parents as their daughters take control of their epic prom night. The Blu-ray and DVD feature unrated bonus content with even more wild shenanigans including deleted scenes, gag reel, line-o-rama and more!

Making her directorial debut, Kay Cannon (writer of the Pitch Perfect series), along with the producers of Neighbors and This Is the End, bring laugh-out-loud moments in the outrageous comedy Blockers. When three parents (Cena, Mann and Barinholtz) stumble upon their daughters' pact to lose their virginity at prom, they launch a covert one-night operation to stop the teens from sealing the deal.

HotBDUHD
A winner of awards across the world including Best Foreign Language Film Oscar, 5 BAFTA Awards including Best Actor, Original Screenplay and Score, the Grand Prize of the Jury at the Cannes Film Festival and many more, Cinema Paradiso is released on Blu-ray and 4K UHD 28th September 2020 from Arrow Video. END_OF_DOCUMENT_TOKEN_TO_BE_REPLACED
Hot PicksView