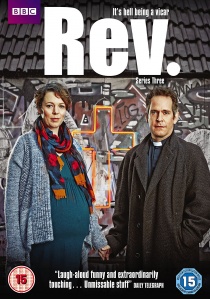 The highly anticipated third series of Rev returns to DVD for a third and final series, plus the 1-3 boxset, on 5th May 2014, courtesy of BBC Worldwide.

Rev sees Reverend Adam Smallbone (Tom Hollander) and his wife Alex (the double Bafta-winning Olivia Colman) adjust to life as new parents in the inner city parish of St Saviour's, Hackney. How will Adam cope with parenthood on top of his small but demanding congregation? Can he manage being a father and a Father?

The new series brings a host of new and returning characters to meet St Saviour's band of lost but loveable misfits in six exciting new episodes that see Adam pushed to the limits of priestly endurance. Can he continue to fight the good fight against indifference, the worst aspects of his institution and his own tendency towards temptation? And as his huge rather empty church continues to crumble around him, can Adam win the battle to keep it open with a tiny congregation and paltry collection plate?

DVD
In Disney's Mulan, released on DVD, Blu-ray and 4K UHD 10th November 2020, a fearless young woman risks everything out of love for her family and her country to become one of the greatest warriors ... END_OF_DOCUMENT_TOKEN_TO_BE_REPLACED
Hot PicksView