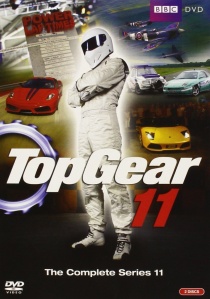 The overgrown boys are back - bigger, faster and more explosive than ever - with Top Gear: Series 11, released on DVD from 2entertain on 25th April 2011.

In series 11 watch as Jeremy, Richard and James put a massive range of old and new cars through a series of crazy challenges, pushing machines to the limit in the name of entertainment. Tyres burst, clutches seize, gearboxes disintegrate, engines fail and bits drop off in their hands, stretching the boys' resourcefulness, ingenuity and patience to breaking point.

Fasten your seatbelts as you watch their attempts to build a better police car with old bangers, race a Nissan GT-R against the fearsomely efficient Japanese public transport system, break down in three sub-£1,000 Alfa Romeos, invent car fox-hunting using only a Daihatsu Terios 4x4 and Jeremy as the prey, and try not to cause a diplomatic incident as they take on the German version of Top Gear in a series of grueling automotive tests.

And as if that wasn't enough, the boys also find time to test some of the hottest new models around including the Ferrari 430 Scuderia, Mitsubishi Evo X, Bentley Brooklands and Mazda's amazing Furai concept car.

HotDVDBD3D-BDUHD
The producers of Godzilla reimagine the origins of one the most powerful monster myths of all in Kong: Skull Island, released on DVD, Blu-ray, 3D Blu-ray and UHD on 24th July 2017 from Warner Home Video. END_OF_DOCUMENT_TOKEN_TO_BE_REPLACED
Top PicksView